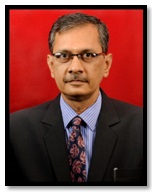 Prior to joining DRDO, he had two years experience with Hindustan Aeronautics Limited and Larsen & Toubro Ltd. He had a long career at NPOL as Member, Project Leader, Project Director and Technical Director and now assumed charge as Director, NSTL. At NPOL, he was heading Mechanical Engineering Group and contributed towards realization of various sonar systems that include hull mounted sonar systems for ships and submarines, towed sonar systems, airborne sonar systems and seabed sonars.

He is a Fellow of Institution of Engineers (India) and a Life Member of the Ocean Society of India.