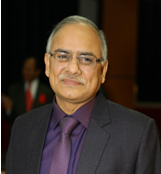 Shri Hari Babu Srivastava took over as Director of Laser Science and Technology Centre, Delhi on 20th June 2014. At this Centre, he has been spearheading research and development in various laser technologies ranging from high power laser sources to chemical/biological LIDARs, explosive identification, laser countermeasures, electro-optical/laser equipment and various other innovative laser applications for use of Armed Forces, Paramilitary and Police forces.

He took over as Director of Electronics and Computer Science at DRDO HQrs on 18th April 2013, where he was instrumental in pushing a large number of DRDO projects of national importance. Later on as Director Tech. (Electronics and Communication Systems), he became part of a DRDO think tank and generated reports related to the areas of ECS cluster and led a team of senior scientists in developing DRDO's business approach towards immediate requirements of Long Term Integrated Perspective Plan of Services. In recognition of his services, Govt. of India promoted him to the rank of Outstanding Scientist in 2015.

Apart from numerous technical papers in various refereed journals, seminar and conference proceedings, and a number of internal DRDO reports, he has co-edited a monograph on 'Night Vision and Electro Optics Technology Review' and a few technical books in Hindi.

He is an alumnus of IIT Roorkee and IIT Kanpur from where he obtained his B.E. and M. Tech. degrees in Electrical Engg., respectively. He is life member of Optical Society of India (OSI) and Instrument Society of India (ISOI). He is also a past Joint Secretary of the national executive of ISOI. He is a recipient of DRDO Cash prize and Laboratory and DRDO Group Technology Awards.