To meet the control Law evaluation requirements of the naval LCA, a dome based RTS facility is set up with a wide visual FOV of 200 deg x 110 deg. RTS simulates the take-off and landing from SBTF and ship deck. The system built on distributed open architecture with extensive use of COTS sub systems to meet the functional requirements of evaluation. RTS was extensively used by the test pilots before the first flight of LCA-Navy. 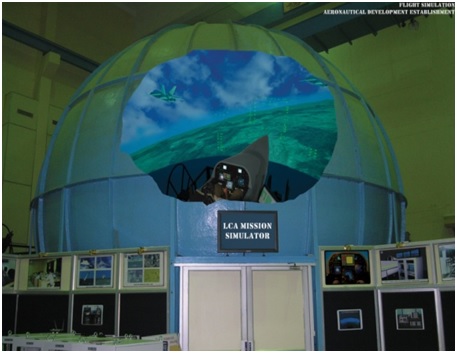 To meet the control Law evaluation requirements of the LCA, a dome based RTS facility is set up with a wide visual FOV of 180 deg x 80 deg. RTS simulates the full profile of LCA from take-off to landing, The system is built on distributed open architecture with extensive use of COTS sub systems to meet the functional requirements of evaluation. RTS is extensively used by the test pilots for the control system evaluation. System can be reconfigured for LCA upgrades / variants.

In order to meet the training needs of the ab-initio pilot of IAF, ADE has upgraded the existing dome based RTS to FMS. The FMS encompasses an aircraft standard cockpit with near real fitments as in the aircraft. The training with start-up procedure to taxiing to execution of the mission to landing is controlled through an Instructor Operator Station (IOS). In addition, IOS would facilitate initiation of different system and sub system level failures such as flight control, engine avionics, electrical system etc. G Seat /Suit fitment provides limited G cueing perceived during the mission. 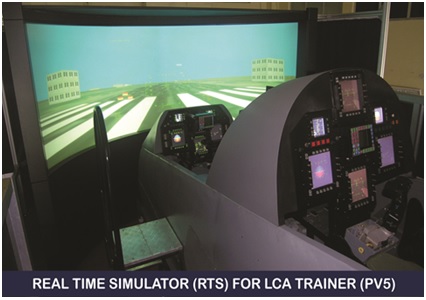 A twin seater version of LCA was developed to meet the training needs of the pilots. It was important that the control system was evaluated for this platform before being flown by the pilots. RTS facility was upgraded to meet the LCA trainer requirements. In addition, the force-feel calibration of the front and rear cockpit was fully tested in RTS before its integration on the aircraft. The facility was extensively used both for control law evaluation and mission planning before the first flight and subsequent flights.

ADE has developed a state of the art simulation facility for the UAVs, both for flight control system design and evaluation. The facility is also used for External and Internal pilot Training. The development carried out on open architecture has enabled the system to scale up to meet the requirements of most of the UAVs developed in the establishment. The salient features of the simulator are the deterministic real time performance aided by a high speed communication network, a 3 channel projection system with wide field of regard for visual cue presentation and intelligent instructor station for training and debriefing.

This state-of-the-art facility consists of flight simulator based on Real Time Simulator (RTS) and three channel visual projection display system along with cylindrical screen integrated with other psycho physiological measurement systems are especially established to assess the mental workload of fighter pilots. This facility is used to get a real time data capture for mental workload studies. The data collection is mission &task based and as such would help in building statistical models to arrive at the pilot’s work load for a given task and estimate the spare capacity of the pilot for better utilization.

ADE is the key Aeronautical Systems Design House in Defence Research and Development Organization. Since its formation in 1959, ADE has been playing an important role in design and development of a variety of aeronautical systems required by the Indian Armed Forces.
To test various Aeronautical Systems being developed by the AERO Cluster laboratories, a dedicated Aeronautical Test Range (ATR) with Air Space was a necessity. ATR at Challakere, Chitradurga is the key facility for integrating and testing various Unmanned Air vehicles before being inducted into the Armed forces and other organisations. This facility is the first of its kind in the country and is a National asset, encompassing 4090 acre for technical infrastructure and 200 acre for Transit & Residential purposes.
The Infrastructure at ATR includes- 1Runway, 3 Taxi Ways, Range Control Center, Two Hangars, Radar center, Fiber Optic Network, Residential Complex, Management block, Technical center, MI Room, Cafeteria, Tech Office, MT yard, SP Vehicle parking area, Creche, Main receiving station with HV DG sets, Substations, Reception, Security, DSC office, DSC accommodation and Watch towers.
ATR was inaugurated by Hon’ble Defence Minister Shri Arun Jaitley on Sunday, 28 May 2017.

The Ground based Test system for LCA is a multi-processor system capable of stimulating and monitoring communication interfaces, either in real-time and non-real-time simultaneously. It is used to stimulate the input and simulate output interfaces to the Flight Control Systems before the integration of real interfaces.

The system uses state-of-the art technology to connect the units of Test system and contains a Prime Interface Panel which enables the connection of either real or simulated LRUs to ensure incremental integration of Real Hardware and Software.

The Test system provides extensive software packages, including a terminal based package called as the Advanced Integrated Test Environment System Software that provides commands and facilities for complete management of the Test scripts during the various tests that are conducted on different LRUs of LCA-FCS.

The Hardware-in-loop Simulation (HILS) facility is an important test facility in which the simulated aircraft dynamics activates the actual flight control electronics as well as the associated sensors and control surface actuators in an interactive manner with high degree of fidelity. It is an essential and major tool in design evaluation and analysis of flight control system and optimization of control laws, Flight control hardware-software integration, Verification and validation of integrated flight control software.

ADE has established a facility for prototype Electronic Engineering with the following capabilities,

ADE has set up Three-axes Motion Simulator Facility (TAMS) to test the stabilization performance of GPAs. A Three Axis Motion Simulator (TAMS) is a major system in the R-HILS that provides a platform for mounting the various rate sensors of the FCS. The TAMS is controlled by the HILS software in closed loop operation.

CTC is well equipped with variety of pilot fabrication facilities and cutting edge testing / characterization equipment, some of which are listed below.