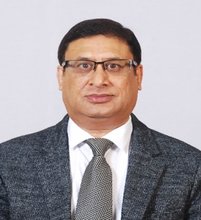 Dr AD Semwal completed MSc in Chemistry from Hemvati Nandan Bahuguna Garhwal University, Srinagar (Garhwal) Uttarakhand and obtained his Doctorate from University of Mysore, Mysuru, Karnataka in Chemistry. He started his career as Scientist ‘B’ in DFRL in the year 1987 and actively contributed in development of protective packaging systems for transportation of edible oil in tin and enhancing shelf stability of refined & blended edible oils for their induction in Services during his initial year of service.

As a propagator of self-reliance, he has successfully motivated entrepreneurs and industries for adoption of modern food processing technologies developed by DFRL, which resulted in transfer of more than 321 technologies to 214 industries for production and supply of safe and nutritious food products to civilian population. He also contributed to the nation during OP Vijay, OP Sahayata, National Disaster Relief Operations (Uttarakhand, Jammu and Kashmir, Chennai, Kerala and Karnataka) and Antarctica Mission by supplying large quantities of processed food for the needy people within a short period of time.

He has published more than 130 Research papers in National/International journals and presented 170 papers in National/International Conferences. He has 11 patents on food processing technologies. He is the recipient of various awards such as NN Mohan Memorial Award, Kejriwal Award, Technology Group Award (DRDO), Scientist of the year Award (DRDO-Lab Level), Best Research paper Award, etc. He is Vice-Chairman and life member of the Association of Food Scientists and Technologists (AFSTI), India and life member of Indian Science Congress Association, Founder Member of Afro Asian Food Scientist and Technologists Institutions (AAFOSTI) and Principal member of Bureau of Indian Standards (BIS) for Food Grains and Starches.