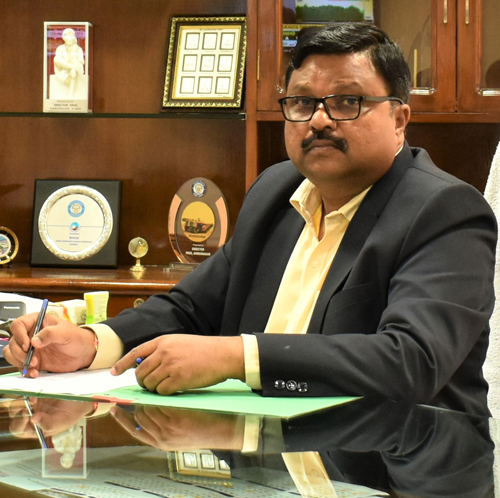 Shri TV Jagadeeswar Rao assumed the charge of General Manager for Advanced Centre for Energetic Materials (ACEM). Prior to his joining as GM, ACEM, he was serving as Director (Admin) at O/o The Director General (Armament and Combat Engineering), Pune.

Shri Rao was appointed as Scientist ‘E’ at HEMRL, Pune in 2004. He is having wide experience in engineering, design, quality management and project management.

At ACEM, he has been team leader and has played pioneer role in creation of infrastructure of ACEM. He was in charge of team responsible for commissioning of facilities like Rotary Vacuum Drier (RVD), Powder Processing Facility, various mixing facilities of Indian-Russian origin, Mechanical Systems and Test Facilities. After Completion of project he has played significant role in commissioning of the plant. Under his leadership, ACEM has successfully processed various Rocket Motors having various burn rates and also carried successful Static Testing/Flight Testing of different motors.

He has been responsible for setting up of in-house facility for manufacturing of Insulation Rubber, which has been meeting requirement of all rocket motor both at ACEM and other DRDO establishments. Shri Rao had headed divisions like Raw Material & Sub-Scale, Casting, Case Preparation Facility, Trimming, Non Destructive Testing (NDT), Static Test Facility, Material Management Division, Admin etc. during his stint in HEMRL and ACEM.

He has spearheaded the development and realisation of Gas Dynamic Tunnel (GDT) facility, the first of its kind in India. The facility will be utilised for static testing and high altitude simulation of upper stage motors.

Honours & Awards: He has been recipient of Special Award for Strategic Contribution in 2009, HEM Best Technology Award for Development of Multiple Casting System for 3 Ton class of Composite Propellant Rocket Motor in 2012, Laboratory Scientist of the Year-2015, DRDO Award for Performance Excellence in 2016, Technology Group Award - 2018 for Significant Contribution in the Static Test of High Burn Rate Propellant and many other prestigious awards.

Publications: He has published more than 30 publications.