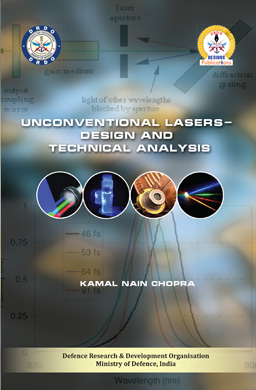 A lot of literature on the conventional lasers like solid state lasers, gas lasers, and semiconductor lasers is available. However, this monograph is an effort on unconventional lasers. In this monograph, nearly all types of unconventional lasers including x-ray free-electron lasers (XFELs), GaSb-based type-I diode lasers, photonic crystal-based lasers, phase conjugated lasers, quantum cascade lasers (QCLs), and diode pumped fiber lasers, have been covered. All these types of lasers are having many useful applications in various fields like industry, surgery, biology, and novel imaging techniques, apart from their usage in practical research applications in most of the scientific and engineering topics. In the field of medicine, these lasers are applied on several areas, including dermatology, in which they are used to skin tone more even. The phase conjugated lasers are very useful for certain applications like�nullifying the optical distortion and also achieving some novel characteristics of the lasers. The fiber laser along with the Raman converter module is capable of the efficient spectral conversion of its unique combined ultra-short radiation pulses into longer-wavelength spectral domain of 1150 to 1550 nm. Tourmaline Ytterbius-1100 has many applications like�time-resolved spectroscopy, Raman spectroscopy, micro- and nano-photonics, supercontinuum generation, fluorescence-lifetime imaging microscopy, and optical DNA sensing technology. The unconventional lasers based on photonic crystals are very useful for certain applications like�data storage, biomedical applications, and display technologies.

GaSb-based type-I diode lasers operating in the optical spectral region > 3�m are very useful for a variety of applications including trace gas sensing, free-space optical communications, and infrared countermeasures. Higher powers from femtosecond fiber lasers have become very useful for a variety of applications including laser processing, medical bio-optics, and opto-electronics The Random lasers have also been drawing the attention of various researchers because of their unique theory, fabrication, and properties. It has important applications in the systems requiring high image quality, e.g., airport security. Raman lasers, spin lasers, and ultrafast mid�IR lasers are also useful in research and other upcoming fields. The amazingly high intensities of XFLEs have led to their great application in the highly specialised areas of scientific research. This monograph provides useful information on these topics, especially from the research point of view. This monograph provides the technical analysis of the theoretical aspects of lasers along with the modeling and designing considerations for maximising the efficiency of these lasers. Along with these some related experimental results available in the literature have been presented to make the presentation clear and meaningful.

He has about 225 publications including 150 in international journals (UK, USA, France, Germany, and Italy) on various topics including thin films optics, lasers and laser components, holography, and modern optics; 12 invited talks; 14 technical reports; and 21 papers in conference proceedings. He has co-authored a monograph titled 'Thin Films and their Applications in Military and Civil Sectors', DRDO, Ministry of Defence, 2010. He has undertaken visits to foreign universities and industries including (i) School of Thin Film Coatings, Department of Physics, St. Jerome University, Marseille, France [5 months (1984-85)]; (ii) Department of Physics, Innsbruck Univ., Austria, including five days in M/s. Balzers, Switzerland [10 days (1995)]; and (iii) M/s. Elettrorava, Torino, Italy [15 days (2000)]. He has vast experience of serving the recruitment and assessment boards of DRDO as Chairman as well as Expert Board Member.