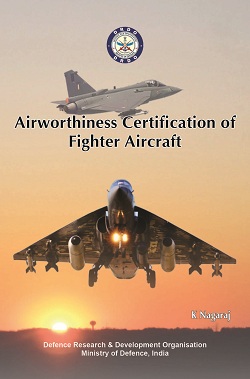 This publication fills a very important niche in the broad spectrum of activities between design/development and release to service of a military fighter aircraft. That niche involves the expertise, knowledge, and ability to absorb and implement concepts/nuances of technologies adopted by the designers and certificated. The task is complex and demands a good grasp of the subject, considering the fact that a modern fighter aircraft encompasses a multitude of disciplines that have to be integrated into a system that will meet the requirements of safety and operational effectiveness. The role and responsibility of the certification authority are further exacerbated in the concurrent design and certification model adopted in India. The text is the outcome of decades of hands-on experience of the author in the design evaluation of the aircraft and its systems for safety and performance parameters, and in implementing the process of airworthiness certification of a variety of fighter aircraft, engines, systems, software and hardware. An attempt has been made to bring out the knowledge required in the design of individual disciplines, evaluation techniques to be adopted, and the interactive nature of the work. The text has been structured in such a fashion as to give to the casual reader a glimpse of airworthiness certification activities, and to the practitioner, a detailed exposure to this complex subject.

Shri Krishnamurthy Nagaraj graduated in electrical engineering from the University of Mysore in 1961, and thereafter obtained the Masters Degree in Avionics and Control Engineering from Cranfield Institute of Technology, UK. As designer in the Aircraft Design and Engineering department of Hindustan Aeronautics Limited, he worked in the HF 24 design group of Dr Kurt Tank. In 1969, he joined the Airworthiness Certification group of DRDO and rose to become the Chief Executive of CEMILAC. He has certified the mid-life upgrades on the Jaguar and Kiran aircraft, supported various other aircraft, and spurred the indigenous development of aircraft stores. He retired in 2001, after successfully certifying the Light Combat Aircraft for the first ten flights.