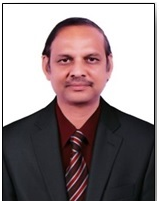 Dr Reddy, initially, worked with M/s BEL, Machilipatnam, as Deputy Engineer and worked in the development of Night Vision Devices. He joined MTRDC as Scientist ‘B’ in May 1987 and took over responsibilities such as; Project Manager, Group Head, Divisional Head & Project Director. He has contributed to a number of projects and technologies and has been involved in the Design and Development of various types of Helix- and Coupled-Cavity TWTs for Defense Systems, MPM based Transmitters. His current area of interest include High Power Microwaves – Directed Energy Weapons, Vacuum Electronic Devices, etc.

He is a Fellow of Vacuum Electronics Devices & Applications Society (VEDAS), Member-IEEE and Member-Magnetic Society of India (MSI).

He is a recipient of DRDO AGNI Award for Self-Reliance for the years 2003 and 2013. He has also received DRDO Scientist of the Year award in 2001, for his significant contributions in the field of Microwave Tubes. He has authored/co-authored and presented more than 25 papers in several national/international journals & conferences.